Geophysics (Or: how do I tell my mother what subject I am going to study) 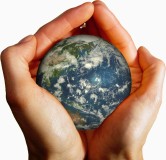 As the name implies, geophysics involves the application of physical theories and measurements to discover the properties of the Earth. A geophysicist must acquire skills in physics and mathematics as well as learn the geological processes on Earth and its environment in space. This knowledge is combined to reduce complex phenomena in the real world to mathematical or physical models that further our understanding of Earth's physical characteristics and behavior. The discipline dates to antiquity, mainly as a scientific approach to earthquake prediction (a problem still unsolved), but major progress began in the late 1500's with initial work in such areas as magnetism and gravity. Tremendous improvements in instrumentation in the early years of the 20th century generated rapid progress in geophysics and ultimately led, in the 1960's, to the theory of plate tectonics.

Geophysics has increased dramatically man's ability to exploit natural resources. Human senses cannot quantify, or even detect many physical phenomena (e.g., magnetism). Humans cannot detect variations in the Earth's gravitation field of one part per million, but modern gravity meters can (in fact, to 0.02 parts per million or better). Seismology, the primary method of petroleum exploration, requires exact timing and recording of very low-amplitude vibrators, vibrations (or shaking) that is far below that which a human would sense.

The following definitions are from Robert E. Sheriff's "Encyclopedic Dictionary of Exploration Geophysics":

Besides of the major topics (global and exploration geophysics), i.e., the study of the global Earth or the search for hydrocarbon reservoirs, there are a lot of other (smaller) topics. Among these are, for instance, environmental management, hydrogeological work, site investigation, groundwater study, contaminant study, catastrophe limit, and others.

Let's have a closer look at some disciplines: